The In: Catch up edition

> Blog > Uncategorized > The In: Catch up edition

So, I don’t have this blogging thing perfected yet, but over the last couple weeks while I got lost in Treefort bliss, I covered some pretty cool shows, including Thao and the Get Down, Candace and Justin Bieber for Portland Mercury, so here it all is in one stupid long post.

But first: Here are two shows you should not miss tonight and tomorrow: 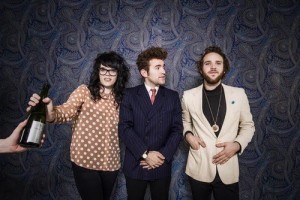 Seven years ago the Lower 48 first united in Minneapolis, creating upbeat, folky tunes inspired by leaving home. Years later the Portland transplants are more active than ever, evolving from those roots on their most mature release to date, their second full-length Hot Fool. After a single from their self-titled EP was featured in a Super Bowl commercial last year, the band has stayed busy, playing as Y La Bamba’s backing band the past few months and doing some fine-tuning in the studio. Their sound falls somewhere between Simon and Garfunkel and the B-52s, in a land of surf, psych, and harmonic dance. After playing together for so long, the Lower 48 have become masters of their instruments, something that’s undeniable at their high-energy shows—if you haven’t caught one yet, it’s a must. JENI WREN STOTTRUP 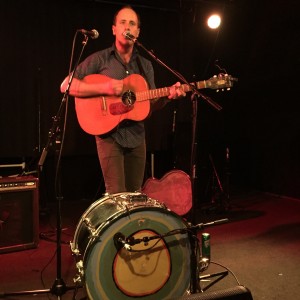 (Bunk Bar, 1028 SE Water) To watch Death Songs, the solo moniker of Nick Delffs, is to step into a Mississippi backyard party ripe with foot stomping and feverish, emotional highs like a voodoo spell cast by his warbly and intoxicating tenor. The artist, currently based in Boise, is never too far from Portland—he’s the drummer for Tiburones, the sweet fruit of his longtime collaboration with Luz Elena Mendoza. Delffs is finally releasing his next full-length sometime this year, long awaited since 2013’s stunning Sung Inside a House. At this show Delffs and bandmate Alison Clarys will play a mix of new and old material, giving a taste of what we can expect on this next record. The night also celebrates Tiburones’ video release for “Golden House” off their luscious recent release, Eva. JWS

Thao and the Get Down Stay Down 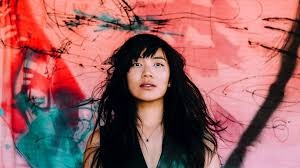 Thao Nyugen of Thao and the Get Down Stay Down has taken a solid risk with her latest, A Man Alive. Ever poignant with her lyrics, this time around Nyugen enters personal territory, singing about her father abandoning her when she was young. The San Francisco artist teamed up with fellow Bay Area pioneer Merrill Garbus of Tune-Yards, creating a musical palette that is daring, ripping apart the folk-pop of her previous efforts at the seams. Fans of Garbus will find the album’s rhythmic movement, war chants, and electronic influences familiar territory. Yet at the core of it all is Nyugen’s confessional tone that bravely yells out, calling to her legions to sing along and claim a voice of their own: “I’ll show you the mettle I’m made of.” JENI WREN STOTTRUP 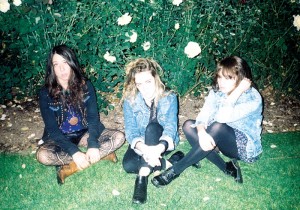 WITH HARD-DRIVING guitars, four-on-the-floor drums, and optimistic vocals sung in phased-out unison, Candace’s self-described “witchgaze” stands out in an era of new-rock. Although the trio originally hails from Minnesota, Candace has a distinctly West Coast sound—it’s as though they saw into the future and knew the Northwest was destined to be their home.

This week, Candace releases their latest full-length, New Future, on Found Object, the culmination of a journey full of hardships. “I had to get out of my hometown. I made a leap and came here with a suitcase,” says drummer Mara Appel DesLauriers of the two-year hiatus that temporarily broke up the close group.

Sarah Rose, Sarah Nienaber, and DesLauriers first met in Minneapolis. As sixth graders, Rose and DesLauriers bonded over guitars in their parents’ houses, later meeting Nienaber at a show. “Seeing Sarah’s band, I was like, ‘Wow! She likes [the things] that I’m just getting into,'” DesLauriers recalls. “We were so excited.”

After bonding over Patti Smith and the Jesus and Mary Chain, the three started Candace (then known as Is/Is) in 2009—the rest is history. They seem like a family, easily finishing each other’s sentences. This unmistakable sisterhood is the cornerstone of the band’s easygoing collaboration.

“The separation was never easy for us, it was just a matter of time [until they moved],” DesLauriers says of the nearly two-year span before Rose and Nienaber joined her in Portland.

“We would have moved anywhere Mara was. If she were in New York we would have gone there,” says Rose.

Since reuniting, Candace has been a staple of Portland’s pop-rock scene. The three started growing roots in Portland during the Know’s 10-year anniversary series in early 2015, where they found their footing on a bill with bands like Talkative and Ah God. This formative show grounded them in the local scene. They’ve continued to play on important bills, including a recent appearance with Pure Bathing Culture at XRAY.fm‘s 2015 Awards. They also make “constant” trips to play in Seattle with friends Draemhouse.

Last year was rough for the band, between their name switch from Is/Is to Candace—which became necessary for obvious reasons—and a near-death experience on the road during the first leg of their summer tour. While they were travelling at 80 MPH, “The whole wheel flew off and the van landed on its ass, and it was skidding on the road and there were sparks flying. It was our first van, and it was so traumatic,” says Rose.

DesLauriers adds, “It was this crazy thing, and I think that we just had to buckle down and make sure this album came out, and luckily it has.”

Candace describes their writing process as “trying to find a feeling.” For New Future, they challenged themselves in new ways as they tried to capture a clearer pop sound. On this album the band also returns to their first instruments—a move they believe has made them better songwriters.

For the recording of New Future, Candace flew in longtime engineer and “fourth member” Neil Weir of the historic Minneapolis studio Old Blackberry Way. They took advantage of Jackpot! Recording Studio’s plethora of tools—reverb walls, a Moog wave, and more—taking risks and using everything in the studio to expand their sound.

What has emerged is a mature and spirited album that is a testament to the energy and camaraderie of the three women. DesLauriers says it best: “It took all six-and-a-half insane years to come up with something like [New Future], through all the hardships, it took the crazy timeline of this, ourselves, our band and what we’ve gone through to somehow get to there. Wherever we are, we could do it together.”

Justin Bieber in a Plexiglass Case of Emotion at the Moda Center, Sun March 13 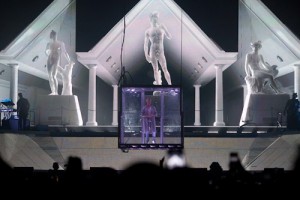 Playing to a packed arena of screaming on-fleek millennials, Justin Bieber’sModa Center concert on Sunday night was a dance party of teenage dreams, replete with Tron-like visuals, smoke plumes, rising cubes, and a built-in skateboard ramp. The pop star has been known as much for his music as his public stumbling, growing up in the spotlight since first being discovered by Usher as a preteen. Fittingly, he began his set by rising up in a glass box, decked by Grecian statues, as if proclaiming his self awareness of the Adonis-like status he lives with, forever watched inside a glass house even as he’s recently sought to rehab his image.

Bieber moved through his set with an intensity that was reflective of the start of a tour: still trying to get it down, a bit wooden, often missing his lip-sync cues, but nonetheless full of high energy. He was flanked by a bevy of acrobatic dancers dressed in flannels and jean shorts, who used the full spectrum of the stage, sliding down banks, hanging from aerials, and breaking down hip-hop inspired moves. Bieber kept primarily to the material from his latest release, Purpose, with throwbacks to his biggest hits, “Boyfriend,” “Baby,” and “As Long as You Love Me.”

Keeping with his ’90s theme, in the second half Bieber stepped out in a long Marilyn Manson T-shirt and flannel with the words, “Bigger than Satan… Bieber” emblazoned on the back. After a high-energy first half, he brought it down a notch with his guitar and led a sing-along to “Love Yourself” on a couch that looked like it belonged in his mom’s basement—before bringing it back up, literally, with a floating trampoline followed by a prolonged drum solo on a rising platform at the front of the stage.

Bieber elicited the biggest screams of the evening as he laid down on the stage as if to take a nap, admitting that he “didn’t sleep last night, I was ragin’, ragers. I’m going trout fishing tomorrow, maybe rehydrate.” He did indeed rehydrate during the final song of his set, “Sorry,” with a cascade of water from the front of the stage giving him a chance to take off his shirt and finally lighten up, showing the first glint of pleasure in the evening. For the man in the glass house, Bieber still appeared afraid to completely shatter the walls, but it was a step in the right direction.