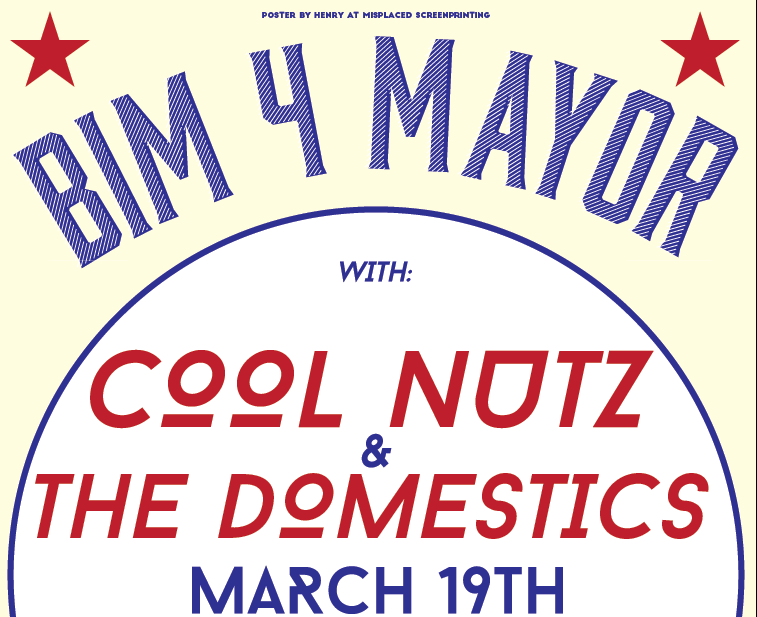 As you know, Treefort Music Fest is just a couple days away and we’re announcing the lineup for our FIRST OFFICIAL SHOWCASE tomorrow!  So, I’m not sure where I’m headed yet.. but here is a quick line up of 4 shows that you really should not miss if you can help it tonight.  There is a little for everyone here.

1) Bim Ditson’s Campaign Rally with Cool Nutz and The Domestics- ALL AGES – FREE- Hawthorne Theatre 7:30 Right now there is no denying that we are on the verge of a music industry crisis, which if we can get the political backing like Seattle or Austin, could end very well for our small city allowing creatives to thrive.  Bim, who is a cult hero in town, has some great ideas and we really need his voice in the Portland Political scene.  He also brought on two of Portland’s greatest bands Cool Nutz and The Domestics on board for the bill, it’s a for sure.  I’m going to interview Bim next week while I’m at Treefort as a part of my coverage to get a better scope of what he has to say our industry needs.

2) Radiation City’s album release at Mississippi Studios.  6:00 ALL AGES  9:00  21 + $15 and get there early.  I think the show I’m most going to miss tonight is my beloved friends Radiation City.  I first met Cameron and Lizzy outside of the Holocene after one of our first Shy Girls shows.  They were my favorite band in PDX and I was in awe that they liked me.  Since then, they are some of my favorite people and their music is heaven on the ears.  They are also one of Portland’s most successful bands and I’m really psyched to interview them next week for Gritty Birds.

3) The Return of Mascaras-9 pm $6 Doug Fir: Papi is finally back in town, after a 7 month vacation.  This is going to a really special celebration and a rad extra addition.  Tents and The Dovecoats are opening the set.  If you haven’t met Papi before, take a listen to Episode 11 of the podcast to get to know this awesome soul.

4) Nina Simone Tribute with LaRhonda Steel and Adrian Martin Sextet– Alberta Rose Theatre – 8 pm (Portland Mercury)”Nina Simone’s legacy is undeniable. The tragic, lauded artist and civil rights activist was one of the greats of her era, a classical pianist who began to sing when her early gigs required it. Her emotive voice was an agent of change, and her career is the focus of LaRhonda Steele and the Adrian Martin Sextet’s retrospective. Steele is an appropriate and powerful conduit for the late artist, and she’ll be playing songs from Simone’s early years. Known for her warm, bluesy alto and dynamic stage presence, Steele has wowed audiences as one of the most prominent blues vocalists of the Northwest for decades, and like Simone, she’s not immune to the trials of life, having recently recovered from a battle with breast cancer. Paired with Martin’s classical-meets-jazz sextet, the power of Simone’s legacy is bound to shine in glorious light. JENI WREN STOTTRUP”